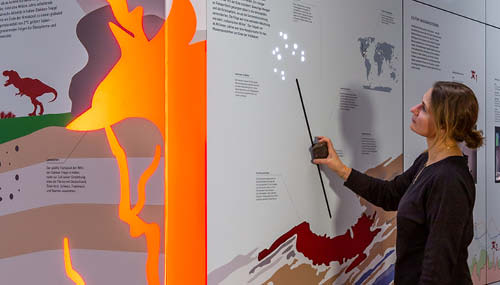 The State Museum of Natural History in Stuttgart contains one of the most important scientific collections in Europe with over 12 million objects and is the third largest research museum in Germany. The collections are continually being expanded under the aspects of >research and presentation<. The combination of natural history research and a wide range of knowledge transfer through diverse educational and public relations work is characteristic of the Natural History Museum. In the Museum am Löwentor, the focus is on paleontology and geology. The redesign of the permanent exhibition will be completed with a further exhibition area “Tertiary – Born from the Catastrophe”.

This area, which is to be redesigned, consists of two sub-areas that are to be staged differently. The first part tells the story of the extinction of the dinosaurs at the end of the Cretaceous period: from volcanism to an asteroid impact and climate change. With the subsequent Tertiary, the age from the asteroid impact 66 million years ago to the Ice Age 2.6 million years ago, the era of mammals begins. The museum would like an emotional staging for this area. The second, objectively staged section deals with the five major extinction events of contemporary history, the "Big Five", and the climate. The context of this time and its events must be prepared in an understandable way and the exhibits must be staged in a contemporary manner. With our exhibition design, we want to make visitors curious and interact with the exhibits.

The professional and constructive cooperation with the VISUELL team resulted in an excellent part of the exhibition that appeals to young and old in equal measure. Office for Exhibitions, Scenography & Graphic Design,
Naturkundemuseum Stuttgart

From our research, which consists of participatory observations and surveys of the target group, we draw valuable insights on which we base our concept. We first implement this in the form of a model and various prototypes. In close cooperation with the scientists of the Natural History Museum, the concept is constantly being refined. In the first part, the Cretaceous period with its drastic changes is staged as an emotional experience. We attach particular importance to addressing different senses and making history tangible for visitors. Hands-on exhibits are enhanced by digital media. On the one hand, the asteroid impact can be simulated, on the other hand there is an interactive wall that can be controlled by touch. At various listening stations we get to the bottom of the question of how the world might have sounded back then. Impressive finds from this period are staged in black showcases with the right lighting. In the second section, visitors follow the trail of the five major mass extinctions. An infographic is controlled with a slider, which visualizes the connections between the "Big Five". The specialist audience can use a detailed diagram with in-depth information on the mass deaths. Development and programming of the interactive elements are also done by VISUELL. During construction, the team coordinates the work on site.

The walls and interactive stations we designed are complemented by a life-size triceratops head model that juts out into the space. Overall, a very harmonious picture is created that invites visitors to explore the two areas.